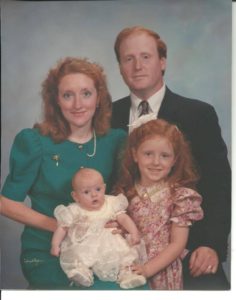 Naperville — Bill, a Sox fan from the Southwest Side of Chicago, married Madonna, a Cubs fan from Evergreen Park, in 1984. She’d bring him to Wrigley Field and she would accompany him to Sox Park. It was an amicable rivalry, which kept things lively during the lazy days of summer.

Fast forward to 1993: Bill and Madonna had added two daughters to their family, Shannon was 6 and Nora was not quite a year old. One day that May, Bill found a lump and within weeks was in the hospital fighting a particularly aggressive form of lymphoma. Madonna (with help from friends and family) was doing whatever she could to hold everything together.

One of the very few bright spots that summer occurred in August. Madonna’s uncle called to offer his two extra tickets to an upcoming Sox game. Bill was home recovering from a round of chemotherapy and a trip to Comiskey Park seemed like heaven. It’s amazing how exciting ordinary things become when you are living through an extraordinary situation.

Madonna wanted to go with Bill to the game, but there was someone else in the house who needed a good time as well.

Shannon watched her 34-year-old father lose his hair and spend long periods of time in a hospital room attached to tubes. There was no telling how many more opportunities she would have to spend with her dad. It was decided that Bill would go and his escort would be a little red-haired girl proudly wearing her Sox cap and T-shirt.

The scene, as told to Madonna by her uncle, was perfect: a beautiful summer evening with blue skies, a man wearing his baseball cap to hide his balding head, sitting next to a little girl excitingly holding onto a scorecard and pencil. He was pointing to the players in the outfield and one imagines he was telling her who they were and what positions they played. The aunt and uncle stood back to watch and gave them their time together. They were gazing upon a truly beautiful moment.

Throughout the game, Bill helped Shannon fill out her scorecard; they ate hot dogs and peanuts, drank soda and cheered for their beloved White Sox. Shannon came home and excitedly told of her wonderful night at the ballpark. God knows they needed it.Madonna planned a birthday party for Bill to take the edges off such a tough year. Madonna had written to news anchors, newspaper columnists, radio announcers, sports celebrities and even Mayor Richard Daley asking for birthday cards for Bill. This would be her present to him.

The cards and autographed pictures started pouring in, but they were never delivered to their recipient. Bill Foley died in November. The cards and kind thoughts, however, were a huge help to Madonna. The senders would never know how much it meant to know that others cared.

One evening the phone rang while the children were asleep. The voice at the other end asked for Bill. He identified himself as Ken Harrelson. The name didn’t click for her because she had been through so much.

What did he want, she asked? You wrote me, he replied. All of a sudden it occurred to her that this was “Hawk” Harrelson! The “Hawk” Harrelson, the Sox announcer, calling for Bill. She burst into tears as she told him that he had died. He talked to her for a while, calming her down and helping her through a very difficult moment.

Madonna would never forget Harrelson for his thoughtfulness, his patience and his understanding.

Eleven years have passed. Shannon is 18 and heading for Purdue, while Nora will be entering 8th grade. Their lives have gone on and they are doing well. They follow both Chicago baseball teams, but when they go to a ballpark, they head to the South Side. Friends ask Madonna why she switched. She had been a Cubs fan all her life. What happened? The answer lies in the summer of ’93!